This evening, around 7:11pm, a large snake was killed by one of the students staying at the fellowship center owned by Chapel of the Light, University of Ilorin, located at the left back of Chapel.

The snake whose length was unknown was sighted at the back of the fellowship center, which was later killed. 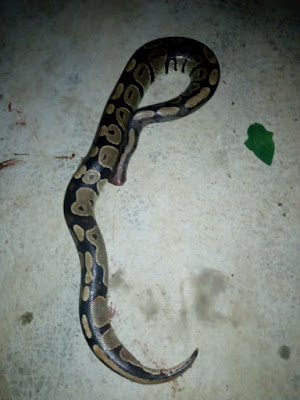 The snake was killed despite how big it is. The snake is a Python, Which is called ‘mona-mona’ in Yoruba. 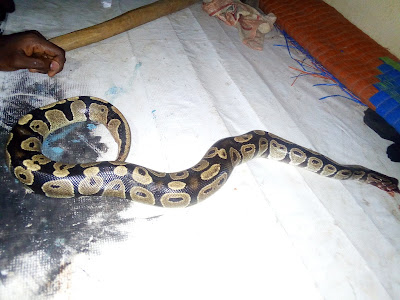 The snake got people talking; concerning the light rain that fell, Most said it came out due to the fact that where it was using as its abode is cold, so it was about looking for somewhere else when the student who saw and killed it coincidentally met it.

Stay Safe and atleast always be with a torch at night, avoid staying at dark places without a torch (be it phone’s or any other).

Optimist is wishing you success in your academic pursuit.
Would you love to advertise on our website? CLICK HERE

Humans still have dominion over animal s right?.. And animals are much more than humans? . The rest is story…

Bro Anonymous, The fact that Unilorin has a zoo and runs Zoology as a course does not mean they have no other job than running after snakes and animals (esp. at night). Besides, it was a threat where it was found. Since u graduated as a zoologist, his many snakes have u caged, how many are u keeping in your house?
#think_about_it

Lol. Maybe
There is no place in unilorin that students will want to capture it alive, once seen, the next thing is kill.

Shame on unilorin. I don't expectsuch a large snake to be wasted when we Have a Zoological garden right inside the school.Trained peraonnels are there that can capture the snake for tourism. I don't blame the killer because there is no awareness on that. I am a graduate from department of Zoology. Animals need to be protected in order not to drive them to extinction. Thanks